May 2015 was the wettest on record in Dallas going back to 1899. There was major flooding throughout Texas. The club flooded three times within a week with water rising almost 2 feet over the docks. It was a mess. Club members responded to the call for help all three times just to see their effort washed away once more. With the promise of sunshine for at least a week, on last heroic effort was made to clean up the club.

There have been a number of rainfall records set recently. The wettest year on record was 2015 with May and August setting records as well. The second wettest year was 2018 with February, September and October also setting records. We had several major floods in the fall of 2018. The worst reached the bottom of the windows in the clubhouse - 3 1/2 ft over the docks.

The second and worst of the floods sent water about 2 feet.over the docks. Photos by Frank Richards. Photos from clubhouse security cam from May 29 at 10am and 6pm provided by Jim O'Connor. 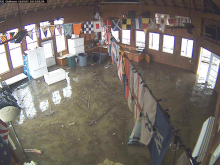 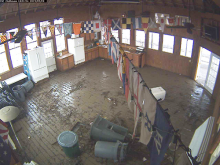