The dam closed it gates 100 years ago on June 24, 2011 and White Rock Lake began to fill.  Centennial events were held in and around the lake to commemorate this milestone. They ranged from a photo contest to a half marathon and included a Centennial Bike Ride, Historical Exhibit at North Park Mall, White Rock Lake Festival, Rowing Sprint Championship, Bass Fishing Tournament, Beach Party of the Century and a Centennial Concert at the Arboretum. 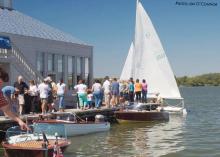 Both the racing and social programs at the club continue to expand.  Races are being held on Wednesday evening (Lasers and fun races - photo), Friday evenings (Vanguard 15s), Saturday (Butterflys and Snipes) and Sunday (all fleets). The First Friday parties were started in the 2000s and are still going strong starting in the Spring and finishing in the Fall.  These are very popular with the membership and well attended.  The SMU sailing program at CSC continued hosting several SEISA regattas each year until it became inactive in 2016.

The club also hosts a Radio Control Fleet which takes advantage of the club’s unique over-water facilities each spring hosting a major International One Metre (IOM) class regatta - annual Blow Out Regatta (photo).  It has grown to attract participants from around the US and from foreign countries.

In 2011 and 2012, the plumbing and electrical systems, respectively, were replaced. Since CSC is a volunteer organization and members do most of the club maintenance, a financial incentive was added to encourage members to support the work days.  This was added to the bylaws in 2004 and continues to help turnout.   A new annual club award was created in 2013 to recognize the Spirit of Volunteerism and was named in honor of Bob and Kathy Harrington.

Other projects provided additional pads and deck space for Lasers, youth Lasers and 420s and SMU 420s, and davits for Corinthians east of the north gazebo and on the northeast dock. These were accomplished in 2014-15.Maintenance continued with replacing walkways and expanding the club motor boat storage.

Up the lake, White Rock Boat club entered into a major facilities renovation program, as well, rebuilding piers, pads and the clubhouse and adding new heads.

The club continues to grow with between 300 and 350 members.  We made a final push into the digital age in 2011 adding credit card payment for dues and special events. In 2019, we started replacing the communications network within the club and building a new club website.

The Women's Racing program was reprised in 2011 as WOW - Women on the Water - and the Snipes held the 75th Southwestern Regatta that same year. WOW has grown providing a supportive learning environment for racing and non-racing women. The clubs sadly sailing program continues to be filled to capacity each spring. 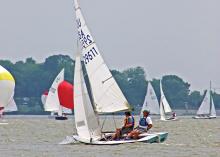 CSC, in a unique partnership with Dallas Corinthian Yacht Club, hosted the 10th Annual Leukemia Cup Regatta in 2011. All centerboard boats and the Corinthian Fleet sailed at CSC on White Rock Lake, with DCYC hosting the Catamarans and keelboats at Lake Lewisville the following weekend. The fund raising total for the first 10 year of the event reached $1 million. A special fundraising event replaced the Leukemia cup in 2013, The Commodore's Cup where the Commodore chooses a charity to receive the regatta proceeds.

The club has extended other traditions as well, such as Sailing for Rhinos which is held in conjunction with the Dallas Chapter of the American Association of Zoo Keepers (AAZK) and raises money for preservation of the endangered Rhino.  The 16th annual event was held in 2019

CSC hosted its first Special Olympics Regatta in 2000 and the tradition continues today. CSC has qualified a team for the Special Olympics World Games since 1999. The 1999 games were held in North Carolina and we returned with a bronze medal. The games are held every 4 years in the year prior to the Olympics. CSC teams won Gold medals in 2003 (Ireland), 2007 (China) and 2011.  Anderson Jones (CSC) and his unified partner Curtis Brown (SOTX) won the Special Olympics World Games in Athens, Greece in 2011. Steve Comen took a group to the world games in Los Angles in 2015 and brought back both gold and silver. Roland Forester and his unified partner, Tyler Dodson, represented the United States winning a silver medal at the 2019 games in Abu Dhabi.

Talk about a big deal - the club hosted US SAILING’s Championship of Champions regatta in 2011.  This regatta brings together 20 sailors who have won national class-championships within the past year.

Twenty races were sailed in round robin format over 3 days in October.  Club members' Flying Scots were used.  CSC put their best foot forward on and off the water with the weather god’s cooperation. CSC was awarded the prestigious St. Petersburg Yacht Club Trophy (shown above) for the excellent race management at the CofC regatta. CSC also won this trophy in 1986 which puts it in elite few who have one this trophy more than once.

The club hosted the Flying Scot Wife Husband North American Championship Regatta in 2019 with 35 boats competing from as far away as Massachusetts.  CSC sailors Heidi and Kelly Gough won the regatta.

The club holds race management seminars striving to maintain a top notch race program. The US Sailing Advanced Race Management Seminar was hosted by CSC in 2019.

The lake’s spillway and dam were severely damaged in a flood in 2006.  After an extended design period, work started to rebuild the spillway and repair the dam in late 2008 and was completed in 2010.

This project added observation areas, parking and trails to the area which now serves as the gateway into the park.  The park department, using bond and private funds, embarked on a major program to upgrade other park facilities around the lake – roads and parking lots, jogging/bike trails, landscaping, dog park, lighting, signage… which ran into the mid-2010s.  The elevated bridge on Northwest highway was completed in 2012. The Arboretum embarked on a major expansion program. The White Rock Boathouse expanded its facilities building a new rowing center next to the filter building in 2008. A second rowing club, Dallas United Crew, began operating from a parking lot between CSC and WRBC in 2012 and completed a permanent facility in 2019. The new millennium has brought many improvements at the club and around the park.

May 2015 was the wettest on record in Dallas going back to 1899. There was major flooding throughout Texas. The club flooded three times within a week with water rising about 2 feet over the docks. There were several more bad floods in late 2018 with the water up to the clubhouse’s windows.

There was a freak storm in the Spring of 2019. The storm was moving east across Plano a little after 1pm prior to Sunday races. The PRO postponed until it passed. The cell made a hard right turn and passed right over the lake with sustained hurricane force winds which heavily damaged several boats.

The junior program continues to thrive with the junior sailing camps growing each summer. We are currently conducting 5 camps a year that are at capacity with waiting lists. Clinics are being held year round to help develop the young racers.  The CSC racing team has been quite active and successful on the TYA youth regatta circuit. CSC’s youth circuit regatta attracted 73 boats in 2019.

The Texas Sailing Association (TSA) has a long tradition of producing champion racers that have bested the best at events all over the globe. The first annual TSA Bob Gough Race of Champions was hosted by CSC in January 2017.  It had a unique, multi-generational format. The winners of each of the Youth Circuit classes were invited to participate. They brought one adult crew from their home club and TSA will supplied a Texas Legend crew.  CSC provided Flying Scots for racing. The regatta will carry the name of CSC’s Bob Gough, one of Texas‘s legendary race officials.  Some of the Texas Legends that participated in the regatta included Kelly Gough, Bill Draheim and Paul Foerster.

The decade ended with CSC celebrating its 80th anniversary with an open house at the club that was open to the public, special club apparel and gifts and a pull-out-all-the-stops anniversary banquet at Lakewood Country Club.