There were a number of young people sailing from a public pier in the northwest corner of the lake. It is said that some of these sailors joined together to form the Corinthian Sailing Club in the late 1930s in search of deeper water. They built a small club with a pier and 8 slips where the CSC north entrance is today (1942 aerial photo left).

CSC was formally incorporated (image right) in June 1939 by Tom Nash, Frank Parker and Wilfred Bruce. Tom Nash became the first commodore and died in office. This link provides a partial list of other early club members that was compiled from available sources.

In the summer of 1942, club membership had grown to 22. DSC had 46 members and WRSC 15 that same year. The club did not have a clubhouse or anything fancy - just a dock, tool shed, rigging ladder (derrick), boat hoist and a few davits. The facility remained quite modest through the 1940s (photo left ca.1950 during flood) and did not start to grow until the late 1950s. The Lightning was introduced to the lake and was a staple of CSC sailing along with the Snipe. Maurice Martin (CSC Championship Trophy) built many of the early Lightnings and Snipes. The second Lightning from the left (photo) belonged to Willis McQueen.

There was a restaurant, the Big Thicket Inn (photo right), which sold sandwiches and drinks on the hill above the club throughout most of the 1940s. The building still exists and is called the Big Thicket. 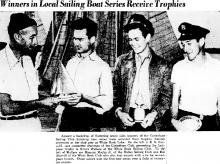 The club had an active racing program from its inception. The first CSC hosted its regatta in August 1939 which was a lake wide free-for-all which attracted 30 boats of all types. The club hosted the Corinthian Handicap Series in the fall of 1939 which attracted 26 boats (trophy presentation photo left) and continued throughout the early 1040s. A Frostbite Handicap series was added in 1940 with participants from all three clubs.

In the beginning Snipes were the primary boats at CSC, although CSC members were also racing Seagulls and Lightnings in the early 1040s. The Snipe owners were members of Fleet 1 chartered out of the WRSC. They participated in races with Snipe sailors from both DSC and the WRSC.

The DSC Snipe fleet started the Southwesterns, but by 1941 it had become a lake-wide regatta, cosponsored by DSC, WRSC and CSC and included the active sailing classes on the lake. The regatta eventually evolved into a regional Snipe event and remains so today. In the late 1940s, the regatta was a regional affair cosponsored by the three sailing clubs and the Dallas Times Herald with Snipe, Seagull and Lightning fleets participating. The map of the lake ( image below left) locating the three clubs appeared as part of the 1942 Southwestern Regatta Sailing Instructions and correlates with the aerial photo (below center). The photo (below right) is of Snipes sailing in the 1948 Southwesterns. Checkout the 55 gallon oil drum being using as a weather mark. 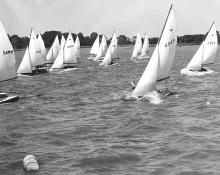 From Snipes, CSC migrated predominately to Lightnings in the mid-1940s. 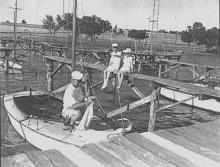 The first Lightning class sloop (photo left at DSC ) was probably raced on the lake in 1940, although some accounts say 1939. These 19 footers were unveiled at the New York Boat Show in 1939. A sailor wanting a Lightning ordered plans from the association and built his own boat. Lightning Fleet 35 became the first organized fleet at CSC. This fleet is the oldest group of Lightning sailors in the South and Southwest. Lightnings became the main boat at CSC in the 1940s and early-50s, and were also sailed out of the other two clubs at that time.

Bill Sherrill of the WRSC remembers - "We did not know it then, but those were some of the best times of our lives. Then along came WW II and things haven't been the same since. " 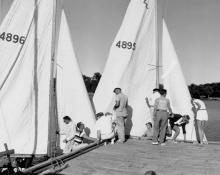 The United States became involved in World War II and about half of White Rock Lake's sailors "answered the call to colors." But, the Lightnings (photo right at DSC) and Snipes continued sailing since the average sailor's age was forty. The Southwesterns were not held in 1943, 44 or 45. Starting gun ammo was unavailable, so the club had to switch to a police whistle. America's deep involvement in the war led to discouraging conditions. As one White Rock publication said - "prospects for real growth are building up at war's end - a full racing schedule will be on hand in spite of Hitler and high taxes. White Rock Lake is a 'ripe field' for Lightnings when such luxuries are available in ample quantities again. Please rush the day." But in 1946, "the boat yards in our area have not reconverted and the home builders say they can not get lumber."

In addition to the Lightnings, a few Snipes and Seagulls sailed from CSC during the 1940s (photo left with DSC judges platform). The club did not have committee and rescue boats. These came along in the 1950s or early 1960s. The race committee would set the marks at the beginning of the racing season using a sailboat. The marks remained in the lake throughout the summer and a sailboat was used to start the races.

The war drew to a close and the enthusiasm for sailing rebounded, until the drought of the mid-1950s put a crimp in sailboat racing, as the lake all but dried up. Photos of Bonnie Barge at pier before and after (located where CSC south gate is today), CSC dock, and WRSC below. The Snipe fleet was down to three boats, but these die-hard sailors managed to find enough water near the dam to sail, but there was not enough water to hold the Southwesterns during 1955 or 1956. Rains that came in the spring of 1957 filled the lake again. It rained until a terrible flood occurred with the water rising six feet above the walkways. The dam was initially constructed with a walkway over the top (photo bottom) and boards that could be added to raise the lake level. The structure would become blocked by debris and contributed to the severe flooding. Flooding remained a significant problem until the walkway was removed in 1966, and later upstream and downstream creek channel improvements were completed. 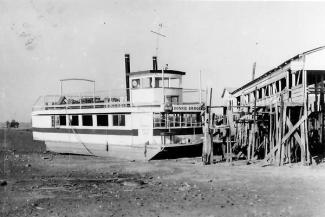 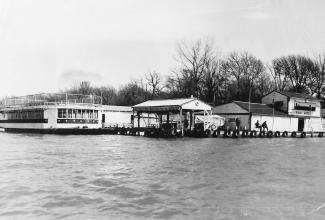 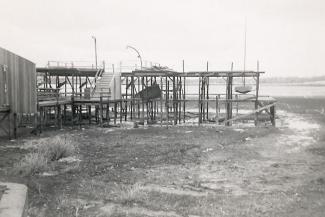 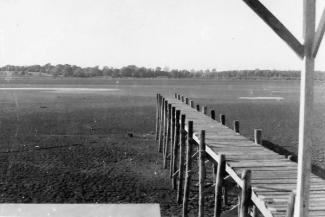 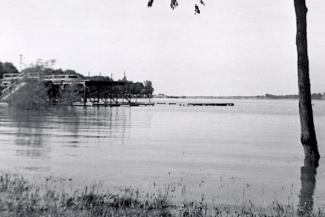 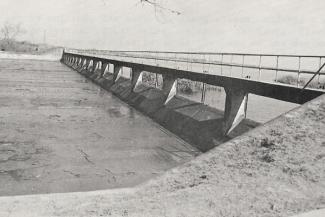