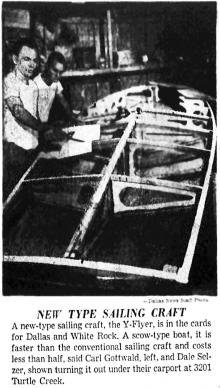 The last fleet of wooden boats, the Y-Flyer (photo left), was built in the late 50s in a barn on Fisher Road above the lake or in sailor's garages. By the early 1960s, fiberglass boats were readily available. The large, national boat manufacturers replaced the local boat builders. Jim and Jean Shirreff were the first sailboat dealers in Dallas and gave generously of their time and resources to promote sailing on White Rock Lake.

The Rebel was the first mass produced fiberglass sailboat and was introduced to the market in 1948. It was also the first fiberglass one-design sailed on White Rock. Rebel Fleet 24 was organized in 1960 and was the most active fleet in the 1960s and 70s. The Flying Scot Fleet 23 followed the Rebels in the early 1960s. Both boats were introduced to the lake in the late 1950s. By the 1980s, there were over 60 Rebels on the lake and the Scot fleet grew to over 100 boats in the late-90s. 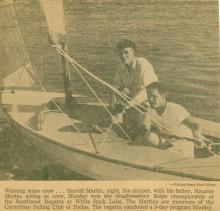 The Corinthian Sailing Club pays tribute each year to one of the local wooden boat builders - Maurice Martin. In 1960, Commodore Bednar donated a trophy for the CSC Champion commemorating Martin who had died the prior year. He was a charter member of CSC and had built many of the Snipes and Lightnings on the lake. The 1951 photo (right) shows Martin and his son in their Lightning. The club championship was originally conducted as the Maurice Martin Memorial Handicap Series. In 1966, the format was changed to a regatta at the end of the racing season to help stimulate greater interest. It was a weekend of all-out club racing to determine the CSC Champion. Three races were scheduled on Saturday and two on Sunday. 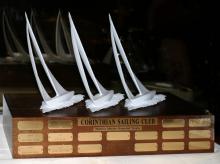 Fleet champions (one from each fleet) competed against one another in various fleet boats, changing boats for each race. Non-fleet contenders were determined by handicap races run along with the normal fleet races. The championship then changed to a single boat format. The boat type was rotated year to year. In the mid-1990s, we started using a Portsmouth handicap allowing each club member to sail their own boat. The modern version of the Maurice Martin Championship Trophy is shown left.

The 1950s and 1960s were a time of expansion. CSC grew to 51 davits and two piers by 1960 (diagram right). The two gates and piers were not joined and the club was drifting apart into two separate clubs. The two piers were tied together in 1961 to bring the club back together under Commodore Willis McQueen. This also provided 18 new davits. In the 1960s, a total of 89 davits were added to meet the growing demand.

The following is a peek into club life during the 1960s based on anecdotes drawn from the CSC archives.

The idea of a disaster fund surfaced in 1962 and dues were increased so that money could be set aside for the fund. This fund continues today. (Possibly because of continued flooding - July 1962 photo left)

"The matter of increasing the dues was discussed. It was felt that we are approaching the saturation point on club membership and therefore, we would not enjoy the number of initiation fees we have received in past years during our great growth period. Dues are now $8.00 per year. It was suggested that the dues be increased to $10.00 per annum. This was turned down since it was pointed out that by increasing [dues] to $10.00, we would be subject to completing the long form Corporation Income Tax Return. It was agreed to putting the matter to club vote at an annual dues of $9.75 and the dues were increased in 1964."

On the race program -

A race committee barge with a 9.8 hp motor was purchased - "the club now has the best judging platform in the area." The club also received approval from the park department to use a boat with a motor greater than 10.5 hp "for rescue operations and race committee work during race days." (1963)

"This year there will be no Skipper's meetings prior to racing. Race Committee will depart from pier one half hour prior to the first race. All races will begin at 2:30 PM. Race instructions will be posted on the Race Board." (1963)

"The average race course will approximate one and a half miles in a triangular course - once around. The committee will plan to set up two courses: one for Lightnings and Flying Scots; one for Rebels, Lido-14's, Y-Flyers, etc., due to the fact the latter boats do not carry spinnakers." (1963)

CSC held the first "Club Junior Championship" in 1965. In 1966, a junior race program was started in conjunction with WRBC.

A "bronze Howitzer starting canon" was purchased. There is more to come on the canon story. (1966)

The Rebel Nationals were held at White Rock in 1966 (photos below). We have held a number of other national events on the lake.

The club did not have running water until the mid-1960s. Up until then, bottled drinking water was used. An electric bottled water cooler was purchased and there was some concern over the use of 20,000 disposable cups in the three summer months. CSC finally received city approval to bring in city water service. (1963)

"V.C. Cornelison 'brought-up' the matter of Dr. Theodore Bisland's impounded Rebel. The City Park Department locked his boat to the davit in 1962 when he failed to pay the annual $7.50 City Lakes License Fee. The boat is full of water and is dragging down the pier and slip. It was felt something should be done to rectify the situation plus eliminating the "eyesore" condition of the boat. It was decided that V.C. Cornelison would contact the Park Board, to determine whether or not the impounding is proper in view of the fact that the boat has not been in the water for two years. An attempt will be made to get the Park Board to remove the lock and Dr. Bisland is to be advised of the need to clean up and bail out his boat." (1963)

Members were assessed $10 in 1963 to add a spectator deck over the existing south pier shelter.

A big flood in the Fall 1964 caused significant damage to the club. Members were assessed $20 to repair the docks.

The membership had grown to 183 members and the availability of davits was a big issue. Also, Sunfish sailors were looking for pads. A proposal to limit membership to 200 was floated and defeated. (1965)

A facilities expansion program provided 48 new davits and storage for 18 boardboats to meet the growing membership demands. A center finger for the T-pier was also added at this time. The T-pier (photo below left) was located where the clubhouse now stands. The wooden davit construction techniques (drawing below right) that were established at this time were used until steel pilings entered the scene in 2002. (1966)

Lake Ray Hubbard was impounded in 1968 providing an excellent sailing venue close to Dallas. CSC members were instrumental in establishing Rush Creek Yacht Club, Chandlers Landing Yacht Club and Captain's Cove in the late 1960s. CSC past-commodore Jim Anderson was a driving force and founder of the RCYC which was established in 1969 and whose facilities were completed in 1970. These "expansion clubs" have enhanced sailing in North Texas.