A number of other new fiberglass boats found their way to the lake in the 1960s and 70s, including the Lido 14 (photo top left), Lone Star 13 (photo middle left), M-20 (photo middle right), and MC Scows (photo bottom left). These classes all faded away in the 1980s and 1990s. The Corinthian (photos top right and bottom right) was introduced to the lake in the mid-1960s and was chartered as Fleet Number 1, as had the Snipe and Lone Star 13 fleets earlier. Both the Snipes and Lightnings moved from wooden to fiberglass hulls and are still with us over ¾ of a century after being introduced to the lake. The Laser (photo top center) came and went in the 70s, but returned to the lake in 2000 and has become a very active fleet.

The race program continued to grow throughout the 1970s. Most classes raced in the Sunday Joint Lake Race Program. The M-16 and Butterfly's were the only boats racing on Saturday in 1976. The Snipe's joined the Sunday program in 1977. CSC had one of the top 10 programs for race participation in USYRU (now US SAILING) with an average of 2700 to 3100 starts per year in the mid-70s. 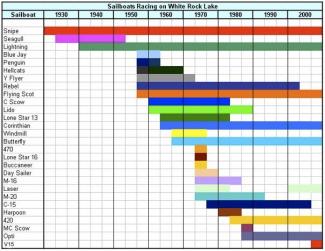 Roz Bowen established the protocol for starts, the rotating course board and the starting sequence when she was Vice Commodore for Race in the 1974. She also acquired the proper flags under NAYRU (now US SAILING) rules. Roz became one of early women, if not the first, sailing club Commodores the following year.

Benny Miller and his sons taught sailing lessons throughout the summer months in Rebels and were responsible in large part for maintaining the boat's popularity on the lake. The Rebel fleet hosted the first State Fair Regatta in 1973 and the regatta continues today. It started as a two day regatta, but has been a one day affair since the early 1980s. The regatta has been popular with regional sailors, which come from around the metroplex to sail in the regatta. The State Fair Regatta has been open to all classes and usually held the first week in October during the Texas State Fair.

Twenty boardboat pads were added along the pier extending out from the north gate in 1975 to replace the boardboat storage racks that were destroyed by a spring storm.

The office of Davit Registrar was instituted by Gene Adensam, when he was Commodore in 1973, because of the trouble keeping track of the ownership and maintenance of davits. With the availability of davits being a perennial problem, the board chartered a committee in 1977 to "formulate a policy…which will hopefully lead to better use of the club's davit facilities. In particular, we are to address the problem of the failure of owners to maintain their davits in good and safe repair and the use of davits as 'boat storage areas.' "  Some things never change.

The Mockingbird Bridge was constructed across the north end of the lake in 1965. Traffic and crowds rapidly increased in the park throughout the 1970s. The crowds became rowdy! A 1977 springtime melee between the police and beer-drinking teens resulted in 49 arrests. One Sunday, the starting cannon almost started a riot. The police, who were trying to control the crowds, mistook the starting canon for gunfire and responded by shooting their guns into the air pelting the sailors with birdshot. We stopped using the cannon in 1977 after lake residents complained. The Park Board decided to divide the park roads on the east shore into four distinct areas in 1979 to stop bumper-to-bumper cruising, bringing an end to Lawther Drive as a continuous roadway around the lake. The consumption of alcohol in the park was also banned at that time based on a request from CSC. Access to the park improved dramatically.