Facilities were expanded again in 1982, when club members built an additional 29 davits under the leadership of Ted Perna. Davits were added at the north and south end of the club and across from the boardboat pads. This was the last major expansion of the docks until the late 2000s.

The docks and clubhouse needed significant maintenance in the mid-1980s. A $600 per member ($300 a year for 2 years) capital assessment was approved in January 1988. A new tack room and restrooms were assembled off-site and delivered on a trailer for installation in the fall of 1988. A new clubhouse (photos below) was completed in 1990. The old clubhouse (photos below) was located where the sail folding area inside of the south gate is now. Photo spreads of the old clubhouse and new clubhouse construction can be accessed via these links. 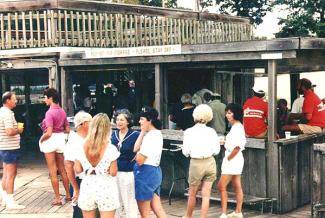 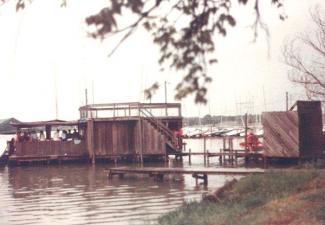 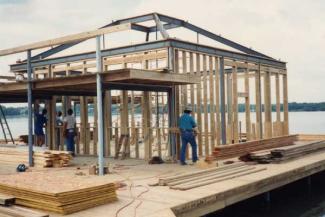 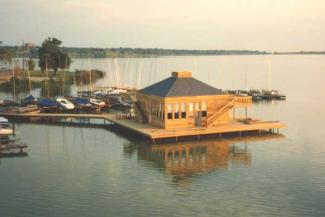 The second pontoon boat that was used for race committee (photo below right) was purchased in 1983, replacing a red and white deck boat (photo below left) We sure knew how to dress back then. The committee boat davits were moved to their present location by the tackroom in 1986. 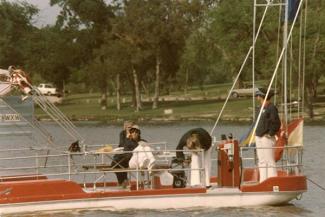 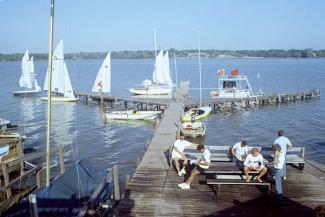 In the good old days, we used permanent marks (1984 Sailing Instruction map left) and defined the race courses by listing the sequence of marks to be rounded. With the committee boat sitting at the starting line beside the G mark, an Olympic course in a south wind might be posted on the courseboard as "D C G D G D". In 1985, we changed to our current system using temporary marks and course designators such as O for Olympic and T for Triangle.

In 1985, the Lightning Fleet moved its race program from Sunday to Saturday where it stayed until 2003 when it rejoined the Sunday Joint Lake Race Program. SMU brought six 420s and started their racing program at CSC in 1985. The Optimist Prams were purchased in the 1980s to start the current junior program (photo).

CSC has a long tradition of excellence in race management. A number of nationally and internationally recognized judges and race officers have gotten their start at CSC. The USYRU (now US SAILING) National Team Racing Championship (Hinman Trophy) was held at the lake in 1986. CSC received the St. Petersburg Yacht Club Trophy (photo) that year. US Sailing selects the recipient each year on the basis of race management excellence.

An openhouse and boatshow (photo right) was initiated in 1987 to "increase one design racing, get fresh blood in the club, overcome the lack of local class boat dealers, and pull in young families via the junior program." The boatshow was not achieving these objectives and the last one was held in 2003.

The lake has frozen over a number of times. There are stories of people driving their Model T's across the icy lake. That cannot be verified, but here is photo evidence (below) that the lake froze and club members played ice hockey in December 1983. 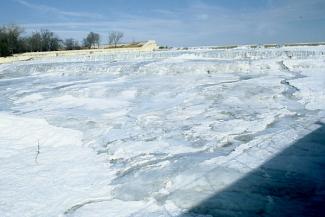 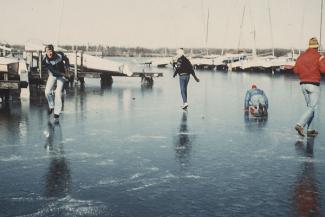