As we enter the 2020s, the Corinthian, Butterfly, Flying Scot, Laser and Snipe fleets all have active racing and social programs. A major update of club racing program’s Sailing Instructions was released to align our course designations and penalty system with practice at other clubs across the nation. The 2020 club had a calendar packed full of club and fleet activities. It appeared that we are headed for a banner year.

But just as we were finalizing plans for activities and the Spring sailing season was approaching, a respiratory virus (COVID-19, aka novel coronavirus) epidemic started in China in January 2020 and spread into a worldwide pandemic by March. It eventually infected millions worldwide including about 6 million in the US. Businesses, schools, churches, sports…were shutdown and people were asked to stay at home unless it was necessary to leave. When out of the house, we were asked to wear face coverings and stay 6 ft. away from others. Several vaccines were developed and inoculations started in early 2021.

This was a year to remember and to try to forget. CSC essentially suspended all activities starting in mid-March 2020. All racing and other organized club activities were put on hold. We were not allowed to gather on the dock except for individual activities such as boat or davit maintenance. The park department prohibited on-the-water activities. Restrictions started to be relaxed in May when the park department once again allowed recreational sailing. Other organized club activities, including racing, were prohibited into June when organized racing was restarted. Regattas and other social activities were still on hold. The first regatta of the year was held by the juniors in September with the State Fair and club championship regattas to follow. (The State Fair of Texas was also cancelled.) The Corinthian, Flying Scot and Snipes eventually held their yearly regattas. Club parties, private gatherings and the annual banquet were all cancelled. The annual business meeting was held outside at the club. This is a year like none other at CSC. 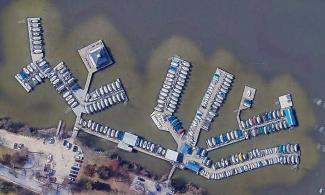 The club has had a major push to renovate and upgrade the club facilities over the last 10 or 15 years. We are very close to being able to coast a bit. Our Rear Commodore for Pier to advantage of the reduced traffic on the dock to complete some projects that had been planned for the next several years.

The restroom complex was completely rebuilt to expand the restrooms and add some creature comforts.  An iwheelchair accessible restroom was added with a toilet, sink, and fold-down diaper changing station to also serve families and provide a changing room. The new tack room that was constructed in 2019, to provide additional space and raise most supplies above most floods high water mark, was preserved and expanded as part of these additions. The Facilities 2020 page provides a look at the state of the club as of 2020.

The north entrance, sail folding area and gazebo have all been renovated or replaced. Additional sail folding area was provided by moving the gazebo to the West. The north gate was replaced and the entrance pier widened to make it easy to move boardboats in and out of the club. The gas locker and propane storage areas were rebuilt at the same time.

The kitchen in the club house has been complete replaced with a custom stainless steel counter and serving system.

A new board position, Rear Commodore Information Technology, was added as electronic communications become more integrated into the fabric of the club. A new from-the-ground-up website was rolled out in May 2020 to replace the clubs first website which was showing its age after 20+ years. This new site gives our public image a fresh face, improves navigation (especially on mobile devices) and allows for our technology team to easily add, or modify, content.

Along with the website, the club internet and Wi-Fi infrastructure was also upgraded to provide more reliability and capability. The modems, routers, Wi-Fi hubs and computers were replaced with commercial grade equipment. A new 4K security camera system was installed around the club to help deter and potentially identify any intruders. New CAT6 ethernet wiring was installed to replace older deteriorating interconnections and to allow us to expand Wi-Fi and video camera coverage within the club.

A board committee is working with city to update the formal relationship with city which was last updated in late 1970s.

The decade began with its challenges. Just as the COVID-19 pandemic was reaching its peak, a record breaking weeklong freeze descended on Dallas in February 2021. Numerous daily record lows were set and the 140+ hours of subfreezing temperatures was the second longest on record. The lake was frozen from Jackson's Point north and around the entire shoreline. Only a small area in the middle remained open water.

The burgee display in the CSC clubhouse was reworked in 2021. The burgees that have hung there for the last 15 or 20 years were taken down and cleaned. Additional burgees have been collected from traveling club member and visitors and burgees exchanges with other clubs. There were burgees from 24 clubs in Texas, 4 from collage sailing programs, 52 from clubs in other states and 9 from clubs in other countries when the burgee display was rehung. The burgees have been photographed and can be seen on CSC Flickr page. There is also a list of burgees.

This history will be updated from time to time as new information becomes available. If you have anecdotes, photos, facts, corrections or other interesting information about sailing on White Rock Lake, please e-mail the webmaster.