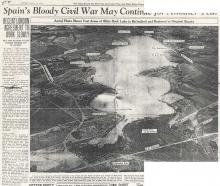 White Rock Lake began to collect silt from the day the dam was completed. In 1933, a news article (left) advocating dredging the lake recalled that "we are able to look back to the days when the lake extended a quarter of a mile north of the Northwest Highway." Several years later, the first dredging of the lake got off to a rocky start in 1937 (photo left).A dredge was purchased by the city for $21,973 and named after Mayor Joe Lawther (photo below right). A few days after it began operations, it sunk. Rumors flew about the drunkenness of the crew, but the real cause was leaks in the hull. 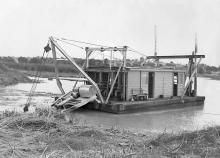 The dredge was raised, repaired and dredging began again in April 1938 and continued until February 1939 when operations were curtailed due to lack of funds. Shortly after that, the dredge sank again. The third time was a charm and the dredging operation continued for three years. The silt was used to fill the swampy areas around the lake shore. The dredging project added 90 acres at the north end of the lake and 60 acres at Dixon's Branch Creek.

The lake was dredged for the second time in 1955-56 during the drought. The city did not have much money. The dredge cleaned up some on the shallow water problems, then sank and rotted.

A campaign to dredge the lake again began in the late 1960s. The lake level was low in 1970 and the Park Department decided that one way to help get rid of silt was to encourage people to haul it off (photo left). Park Director L. B. Houston said "They can remove it by buckets, trucks, trailers, wheelbarrows or whatever. ...About two feet of top soil is available in some areas, particularly on the north end of the lake. Signs will be placed in strategic locations denoting 'Free Dirt.'"

A third dredging commenced in 1974 and was completed in seven months. A few thousand cubic yards of silt were pumped to settling ponds on the west side of White Rock Creek, north and south of the Mockingbird Bridge (photo below right). The dog park is now on part of this landfill. The rest of the silt was just pumped from the shallowest areas of the lake to deeper areas through a spoil pipe running about 100 yards from the position of the dredge.

The contractor was supposed to achieve an average depth of 8 feet. On several occasions, the dredging crew failed to move the spoil pipe. At least three islands built up to within a foot or two of the water surface. Sailors placed stakes on these navigation hazards and forced a meeting with the City, the engineering firm and prime contractor. The dredge had been removed by this time. The engineers stoutly denied that there was a problem and refused to come out and see the evidence. 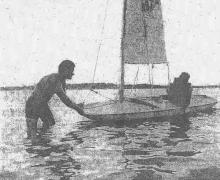 A reporter for the Dallas Morning Newsagreed to cover the story with a photographer, but his editor refused to allow him to do the story. He referred the sailors to a reporter for the Dallas Times Herald who had no problem with his editor. The Dallas Times Herald published an article with this photo (left) of a Butterfly sailor (Bob Biegler) being pushed off a mud bank near Winfrey Point by another sailor (John Diggins) standing in knee deep water. As a result of the publicity, the contractor put a workboat back on the lake which dragged a steel I-beam over the shallow areas until they were deep enough for the sailboats. 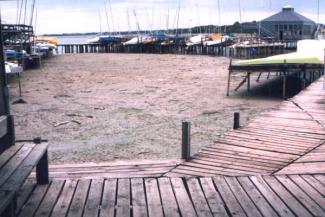 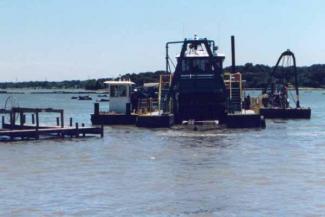 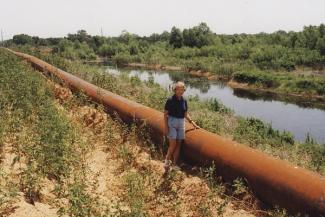 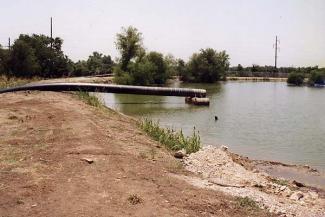 The most recent dredging (photos above) was completed in 1998. All went well this time. The contractor did a great job - completing the job ahead of schedule and removing more silt than planned. The lake was dredged to a minimum depth of 8 feet, north from a line between Winfrey Point and Jackson's Point up to the Mockingbird Bridge. The spoils were pumped 17 miles to an old gravel quarry in south Dallas County. A dry summer combined with the dredging operation caused the water level to drop to a point that sailors were unable to launch boats from their davits by summer's end. Fall rains refilled the lake and we were again enjoying the use of the entire lake.