The first sailboat on the lake was a catboat named Tomcat, owned by Bill Sherrill and Pat Tohms (photo left). The first sailboat race was held on Labor Day 1926 with four boats starting and one finishing. In 1927, the Daily Dallas Time Herald printed a photo of a sailboat on the lake and noted that "the man who steers a sailing vessel from one end of this reservoir to the other on a windy day realizes the lake is not a mere pond." Lightweight boat building materials had not been developed and boat trailers were practically nonexistent, so it was necessary to leave one's boat at the lake. Boats were either moored or stored in boathouses. The early sailing clubs grew out of these cabins and boathouses. 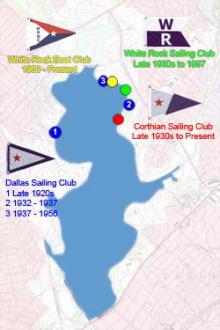 The first sailing club on the lake was the Dallas Sailing Club (DSC) which was formed in 1928. A decade later, the Corinthian Sailing Club (CSC) and White Rock Sailing Club (WRSC) were both in operation. A fourth club, White Rock Boat Club (WRBC), came along much later - 1961. The map (right) shows the location of the four sailing clubs. CSC will be addressed in detail in later sections. This section provides a little background on the other three clubs.

The Dallas Sailing Club was formed in 1928 (maybe as late as 1931) and had a pier and anchorage (photos below on left) on the west shore of the lake. These can probably be seen on the aerial map in the prior section. In 1931, the club was given a 50 foot flagpole from Love Field that was placed on the "beach near the club's pier on the northwest shore" of the lake. The Dallas Sailing Club was formally chartered in 1932 and Dr. Hub Isaacks was elected commodore. He had also been commodore the prior year. 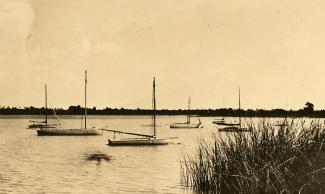 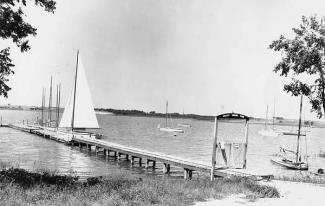 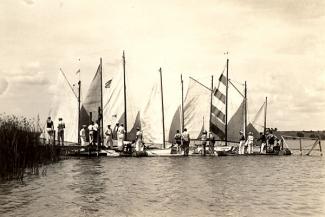 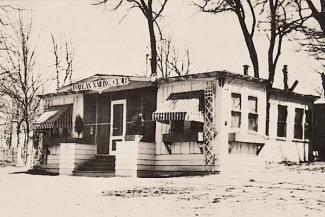 The group moved across the lake in 1932 to the east shore near the site of today's Corinthian Sailing Club in the Big Thicket area. They negotiated a $130 one year lease for an abandoned restaurant, the White Rock Dining Hall, with the city for use as a clubhouse (photo above lower right). There was a floating pier (photo above upper right) directly in front of the clubhouse. The club published a newsletter called The Spinnaker which provided a good source of information about club activities in the early 1930s.

In December 1933, Isaacks was transferred to New York and a going away party was held in his honor. The clubhouse burned in the early morning hours following the party after sparks from the fireplace ignited the roof. The clubhouse was rebuilt on the same site, complete with a large fireplace. When the Issacks returned from New York in 1935, his friends welcomed him back with another party and the new clubhouse was again destroyed that night by fire. 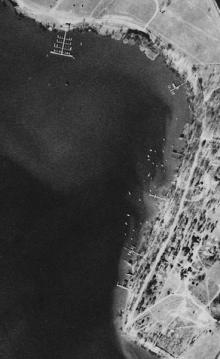 The club then moved to the north end of the lake, west of where WRBC is located today. The CCC built the pier starting in 1937 that was completed in 38. The pier (1942 aerial photo left) was 247 feet long with a T-head and cross piers with 48 slips. There were 32 boats at the club at that time. A CCC planning document stated that DSC had about 50 or 60 boats at this time. This was probably all the sailboats on the lake. A controversy developed over using public labor for construction of a private sailing club. The park board was told to make restitution to the government or open the pier to the public. The board refunded $1800 to the federal government.

A new clubhouse was built, without a fireplace, in 1939. The plans called for a two story building with a lounge, office, and women and men's lockers downstairs. The upstairs was to have a spacious lounge with a service bar opening onto a screened porch and sun deck. The clubhouse was expanded in 1946 (photo right). The final clubhouse can be seen in the photo toward the end of this section. Some of the early members were Howard Chilton, William Clements, E.L. DeGolyer, H.L. Hunt, Hugh Jamieson, Sr, Eugene McDermott and Angus Wynne, Jr. - a pretty heady crowd.

The Dallas Sailing Club formed a committee in 1931 to select the best possible, one design sailboat for the club. A "bloody battle" ensued and the Snipe came out the winner. The wooden boat was built based on plans by William Crosby published in Rudder Magazine, July 1931. J.M. Martin launched the first Snipe, Silver Spray, on White Rock in early 1932. In April, there were 5 Snipes sailing and 10 more under construction. By May 1932, approximately 150 Snipes were registered nationally and the national association was formed. DSC was given the first fleet charter in 1932 and became the home of the Snipe Fleet 1. 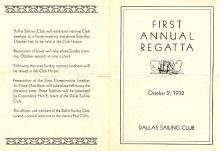 The Snipes held the first regatta (program photo left) on the lake in October 1932. The regatta provided a 3 race series for both the men and the "ladies," as well as, an interclub race. This regatta eventually became the Southwestern Regatta which is still being held by the Snipe fleet today.

Texas had the most active Snipe program in the world in the early 1930s with fleets at Denton, Fort Worth, Waco, and Lake Dallas, as well as, at DSC. The clubs traveled to the other lakes for regattas. The truck loaded with Snipes (photo right) is headed to Wichita Falls. The DSC club members were a major force in establishing the Snipe class and the Snipe Class International Sailing Association (SCIRA). Hub Isaacks was the first SCIRA Commodore and J.M. Martin won the first SCIRA High Point Championship. DSC hosted the 1935 SCIRA International Championship on White Rock. Discord among some of the Snipe sailors lead to the formation of the White Rock Sailing Club in 1935 as discussed below. 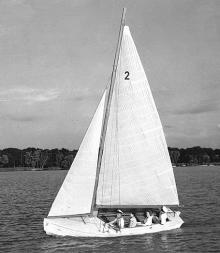 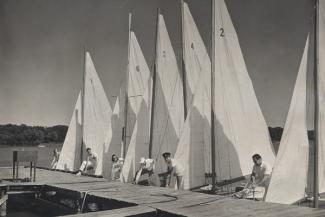 The Dallas Sailing Club built a fleet of club-owned Seagulls (photos above) in the 1930s. The Seagull was also designed by William Crosby, who had designed the Snipe. In the mid-1940s, DSC replaced its Seagull fleet with seven Lightning one-designs which were also club-owned boats. The club had a caretaker who maintained the boats, and if you called ahead, would have one rigged and ready to sail upon ones arrival. DSC built a permanent judge's platform south of the club that was used by the starter and committee to run the races (photo below from 1939 Southwesterns). The races were run around a set of permanent marks. Overturned boats were generally dragged in to the club by sailboat in a southerly breeze - very interesting. A rescue boat was at the pier only for the Southwestern regatta.

When the lake dried up in the mid-1950s and sailing activities were suspended, the Dallas Sailing Club membership along with some members from the Corinthian Sailing Club formed a new club called the Dallas Corinthian Yacht Club (DCYC). In 1956, a committee was formed to look for a location for the new yacht club. 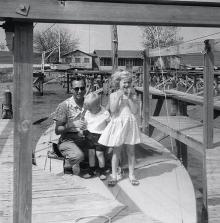 Lake Lewisville (then called Lake Dallas) was selected as the only available location with a large protected harbor. The last Commodore at DSC, A. Balfour Patterson, became the first Commodore of DCYC. This 1955 photo (right) shows Patterson with his children. The last DSC clubhouse can be seen in the background. DCYC began operations on "Old Lake Dallas" before the lower lake had filled with water. The Corps of Engineers estimated it would require ten years for the lake to fill. The heavy rains in 1957 filled the lake within a ten-day period. Roger Hansen provides insight into DSC in some notes he prepared while reviewing this history. Balfour Patterson provides an account of the formation of DCYC (and DSC's demise).

Some of the young Snipe sailors left DSC and formed the White Rock Sailing Club in the 1935s. The Corinthian Sailing Club started several years later in 1939. All three of the clubs had active Snipe sailors in the late-1930s and 1940s. Maurice Martin (the club championship trophy carries his name) built many of the Snipes and Lightnings in the 1940s. 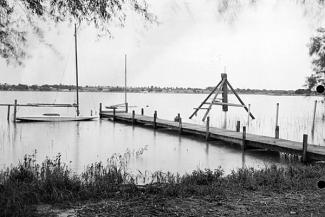 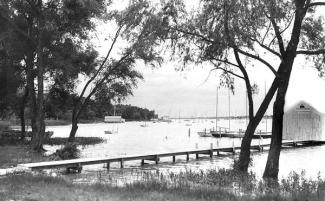 DSC had several members that were unmarried, sometimes over imbibed, and could get pretty raunchy. It got so that the members with children, wives or girl friends could not bring them out to the pier, especially at night. The expenses of the club were also increasing. 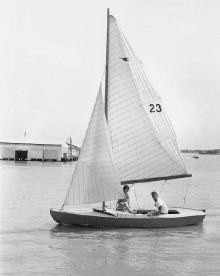 Eleven of DSC's members decided to form their own club and bought a pier (photo above left) across the lake - calling themselves the West Shore Sailing Club. The Park Board moved their anchorage and pier back to the east side of the lake later that year and the club changed its name to the White Rock Sailing Club. A pier (photo above right) was built in the northeast corner of the lake. The club eventually became the home of Snipe Fleet 1 and most of the lake's Snipes (photo left) migrated to the WRSC. The fleet members were a major force in the International Snipe Class providing a number of SCIRA officers and world class Snipe sailors. You can read a detailed account of the formation of WRSC based on the club records and a letter from Bill Sherrill.

The WRSC remained in the same location until the club was torn down in 1998 during the dredging while the water was low (photo right). The membership at WRSC was not sufficient to support or finance club activities in the early 1990s. The Snipe sailors moved to CSC in 1993 to "preserve the continuity and social interaction of Snipe Fleet 1 on White Rock Lake" and "gain access to a 'deep water port." A big cocktail party was thrown to welcome the fleet members to CSC.

The fourth and last club to be established on the lake was the White Rock Boat Club (left) which was formed in 1961 as the brainchild of three members of the Corinthian Sailing Club. CSC was having a problem with tracking davit ownership and the price of davits escalated due to demand since the club had no control over prices. 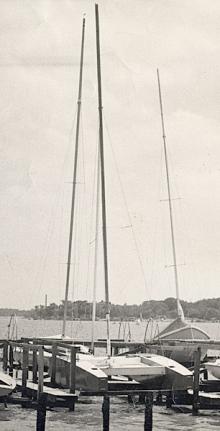 Two of the founders, the Oetkings, had also developed a fine catamaran called the Hellcat (photo right) and had gone into production with growing sales, but they couldn't find davits at CSC. WRBC was constructed not only to supply reasonably priced davits, but to help sell Hellcats. The club sold davits to help pay for the construction of the club, with the provision that the club could buy the davit back if the owner left the club. The club has exercised this right and now owns and leases most of its davits. The club was constructed with a few differences from its present configuration as can be seen in the 1968 photo above. In order to promote organized class sailing, WRBC at one time limited the type of boats kept at the club to racing classes. In the 1970s, the following classes of sailboats were eligible for membership: Butterfly, Coronado 15, Flying Scot, Harpoon, Lido, Lone Star 13, MC Scow, M16 Scow, M20 Scow and Rebel. The club remains active on the lake today and embarked on a major facilities renovation in the 2000s. For more information, read Bill Caldwell's WRBC