The streets were laid for the Forest Hills and Lakewood subdivisions in the mid-20s, and on the hill above the present club in the early 30s. People were moving toward the lake. But, the lake was still far from Dallas' center of population. Old boat houses can be seen in the 1936 photo from Buckner near where it crosses Mockingbird Lane today. These can also be seen in the background of several of the photos in the previous section. These housed power boats. Several were owned by John Williams, who had a power boat marina and owned the Bonny Barge. Williams' marina was located just south of were CSC is located today.

As White Rock Lake continued to grow in popularity, Dallas civic leaders started considering a permanent city park on the shores of the lake. Shortly after being elected mayor in May 1929, J. Waddie Tate proclaimed that it was his desire "to see White Rock beautified and amusements, which will give the people of Dallas a first class pleasure resort, installed on the north side of the lake as soon as possible." The land around the reservoir was transferred to the park department and White Rock Lake Park was created in December 1929. 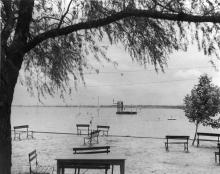 In 1930, the city opened a 500 ft. long, sand, swimming beach (photo) and bathhouse at the site of today's Bath House Cultural Center. Many of the swimmers rode public transportation to the lake. The trolley line was extended to within 5 blocks of the concrete boathouse that still stands at the southwest corner of the lake. There bathers could transfer to a "fast motorboat" to cross the lake to the beach. The bathhouse was built so that swimmers had a place to change from street clothes into their bathing suits and then shower before returning home. Bathing apparel and beach towels could be rented from a concessionaire. The beach was a success and attracted 100,000 swimmers each summer. Checkout the diving board on the concrete platform, which is still there. Food concessions were located on the bathhouse's lower level were vendors sold hot dogs, hamburgers and soft drinks.

Despite significant opposition to creating a Coney Island like park, several concessions were approved. A dance pavilion featuring a huge concrete slab that could accommodate large crowds was constructed near the bathing beach. Dances were held every night except Sunday during the summer. Music was provided by an all female orchestra, the Rhythm Sweethearts. The pavilion proved so popular that it nearly paid for itself during the first summer of operation.

There was also a very nice restaurant on the south shore of Sunset Bay complete with quarters for the keeper. It was called the Sunset Inn.

In 1934, a municipal fish hatchery was built on several acres below the dam (photo left) to stock the lake with a variety of edible fish. The yearly production eventually reached 1 million fish.

During the Depression between 1935 and 1942, the Civilian Conservation Corps, as part of the National Park Service, established Camp 2986 (photo right) beside the lake where Winfrey Point is now. The 250 young men working there were paid $30 a month. The National Park Service worked with the Dallas Park Board to make many improvements around the lake. One of their projects was to remove the fishing cabins and boathouses.

Winfrey Point was built to provide a place for folks to go after the cabins were torn down. The building could be used by anyone based on a first-come, first-served reservation system.

The Big Thicket, Doran's Point (by Flag Pole Hill), many picnic structures, and the seawall around the lake were also built by the CCC. A map of planned CCC projects, drawn by the National Park Service in 1936, shows the location of the DSC clubhouse, docks and boat houses seen in the photo at the top of the page (map left). Note the motorboat concession dock just south of the bathhouse where the water taxis docked.

In 1937, White Rock Lake park hosted 740,000 visitors. According to the National Park Service, it was the most visited municipal park in the nation. In 1938, the Bonnie Barge (photo) carried 150 passengers who paid 35 cents each for an hour-long excursion. The barge, along with a speed boat concession, was operated by John Williams from a dock located close to where CSC's south gate is currently located. The barge was 65 feet long, 22 feet wide and was equipped with a jukebox and two dance floors. Dance music was provided each evening. The Bonnie Barge operated through 1956 when it was removed along with the speedboat concession and other businesses around the lake.

Not long after World War II began, the CCC program came to an end. The old CCC camp was used by the US Army Air Corps as an induction center where many young Dallasites attended boot camp before shipping overseas. In 1944, the Army converted the boot camp to a prisoner-of-war camp to house 300 German prisoners captured in North Africa, who were members of Gen. Rommel's Afrika Corps. Since the boot camp was not enclosed, the prisoners were provided barbed wire and asked to build an 8-foot fence around their compound. The POW camp was deactivated in 1945 and deeded to the City of Dallas in 1946 for a nominal sum. SMU used the barracks as housing for approximately 250 veterans who attended school on the GI Bill following the war. The buildings were removed after the students left in 1947.

Lake Dallas was the city's exclusive water supply in the 1930s. The city had only a four-month supply of water left during a 1952 drought. The city again tapped White Rock Lake for emergency water. The swimming beach was closed in 1952 and never reopened. Dallas continued to draw water from the lake until it closed down the pump station for good in 1964.

A city ordinance was passed in 1958 forbidding boats with engines larger than 10.5 horsepower on the lake. Skis, surfboards and sailboards were also banned. The lake has since been the domain of sailors, kayakers, rowers and fishermen.

The Dallas Parks Department had developed a new master plan for the park. The park department, using bond and private funds, embarked on a major program to upgrade other park facilities around the lake – roads and parking lots, jogging/bike trails, landscaping, dog park, lighting, signage… which ran into the mid-2010s.  The master plan provided a vision, but has not been strictly followed.