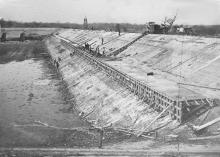 Dallas' population more than doubled from 42,638 in 1900 to 92,104 in 1910. The Turtle Creek Reservoir (near today's Bachman Lake) was completed in 1903 to provide water for the rapidly growing population, but was not sufficient. A drought plagued Dallas from 1909 to 1910 which was so severe that the city turned off the water and delivered water by wagon to its residents.

A dam was built on White Rock Creek to ensure a continuing supply of water. The site was chosen because it was slightly higher in elevation than downtown which provided enough water pressure to reach the top of Dallas' tallest buildings with minimal pumping. 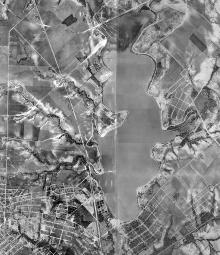 The construction of the dam (photos above) began in spring 1910 and was completed a 1½ year later in 1911. The dam is 40-ft high, 15-ft wide, and made of wooden pilings and earth faced with concrete on the reservoir side. White Rock Lake finally filled in 1914 and provided water for Dallas until about 1930. In the mid-20s, it was recognized that the lake was inadequate to supply the city's growing water needs. A new reservoir called Lake Dallas (now Lake Lewisville) was completed in 1929.

During the 1920s and into the 1930s, White Rock Lake was considered to be out in the country. Automobiles were not plentiful and travel to White Rock Lake was comparable to a trip to Lake Ray Hubbard or Lake Tawakoni today. The city purchased the land surrounding the lake, and in 1919, county jail prisoners completed an unpaved road encircling the lake. It was later named Lawther Drive after the former mayor. The aerial photo (left) of the was taken in 1930. The map probably shows the first sailing club on the lake on the west shore north of Jackson's Point. 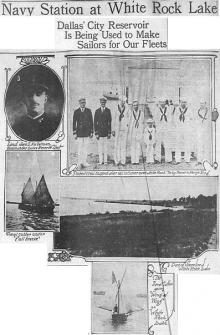 The Navy Reserve Corps of Dallas was established in 1922 and had a dock and naval station on the lake in the mid-1920s. With 3 cutters (photo right) and 150 men, this was one of the largest inland navies in the US. These reservists may have been the first sailors on the lake.

In the 1920s and 30s, the police department operated a work farm at the lake called the "pea patch." There was a brick building with cells below the dam near the pump station. This branch jail was for the less dangerous inmates who were sent out to work off their fines. The prisoners grew vegetables to feed the prisoners in the downtown city jail and maintained the land around the lake.

In these early years, one could get a permit from the city to build a little weekend cabin, fishing cottage or boathouse (photo left) on park land around the lake. Camp sites were leased from the city on a year-to-year basis for $20. The sailing clubs had their origins in these weekend retreats. As one of CCC projects, in 1939, the city ordered the demolition of the over 250 deteriorating boathouses and cabins that remained around the lake. The cabins were demolished as their leases expired. Most were torn down in 1939 and 40. About 30 boathouses remained until they were removed in 1952.