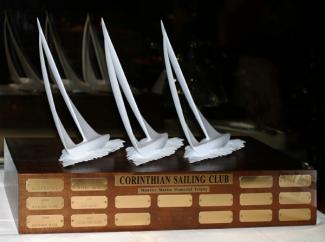 The Maurice Martin Trophy is presented to the winner of the club championship regatta each year at the Awards Banquet.

The Corinthian Sailing Club pays tribute each year to one of the local wooden boat builders - Maurice Martin. In 1960, Commodore Bednar donated a trophy for the CSC champion commemorating Martin who had died the prior year. (See deed of gift below.) He was a charter member of CSC and had built many of the Snipes and Lightnings on the lake. The 1951 photo shows Martin and his son in their Lightning.

The club championship was originally conducted as the Maurice Martin Memorial Handicap Series. In 1966, the format was changed to a regatta at the end of the racing season to help stimulate greater club interest. It was a weekend of all-out club racing to determine the CSC champion. Three races were scheduled on Saturday and two on Sunday. Fleet champions (one from each fleet) competed against one another in various fleet boats, changing boats for each new race. Non-fleet contenders were determined by handicap races run along with the normal fleet races. The championship then changed to a single boat format. The boat type was rotated year to year. In the mid-1990s, we started using a Portsmouth handicap allowing each club member to sail their own boats.

Our thanks to Richard Wade for reconstructing this information.

The Martin Trophy is presented to the Corinthian Sailing Club of Dallas in honor of J. Maurice Martin, the boat builder and charter member of the club.

This trophy is to be presented annually to the champion of the club. Each recipient is to retain the trophy for one year and is expected to have his name and the year of the presentation engrave on the name plate. Each recipient shall have the honor of presenting the trophy to his successor.

The first recipient who is to hold the trophy through 1960 and have his name engrave on the name plat is Jan Arps. The donor of the trophy request that he serve as chairman of a committee to recommend a method by which the club championship shall be determined in the future years. Other members who are requested to serve on this committee are Captain Harold Boss, Captain Largent Parks, Captain Dale Selzer, and Captain Kieth Young. The committee shall be free to enlarge its membership to include other boat representation as it deems necessary.

This trophy is presented to the club with the hope that a suitable small trophy will be presented by the club each year to remain in the permanent possession of each recipient.

The only other restriction the donor wishes to impose is that in the event that a club champion cannot be determined by racing, a champion be named by a suitable committee appointed for that purpose.